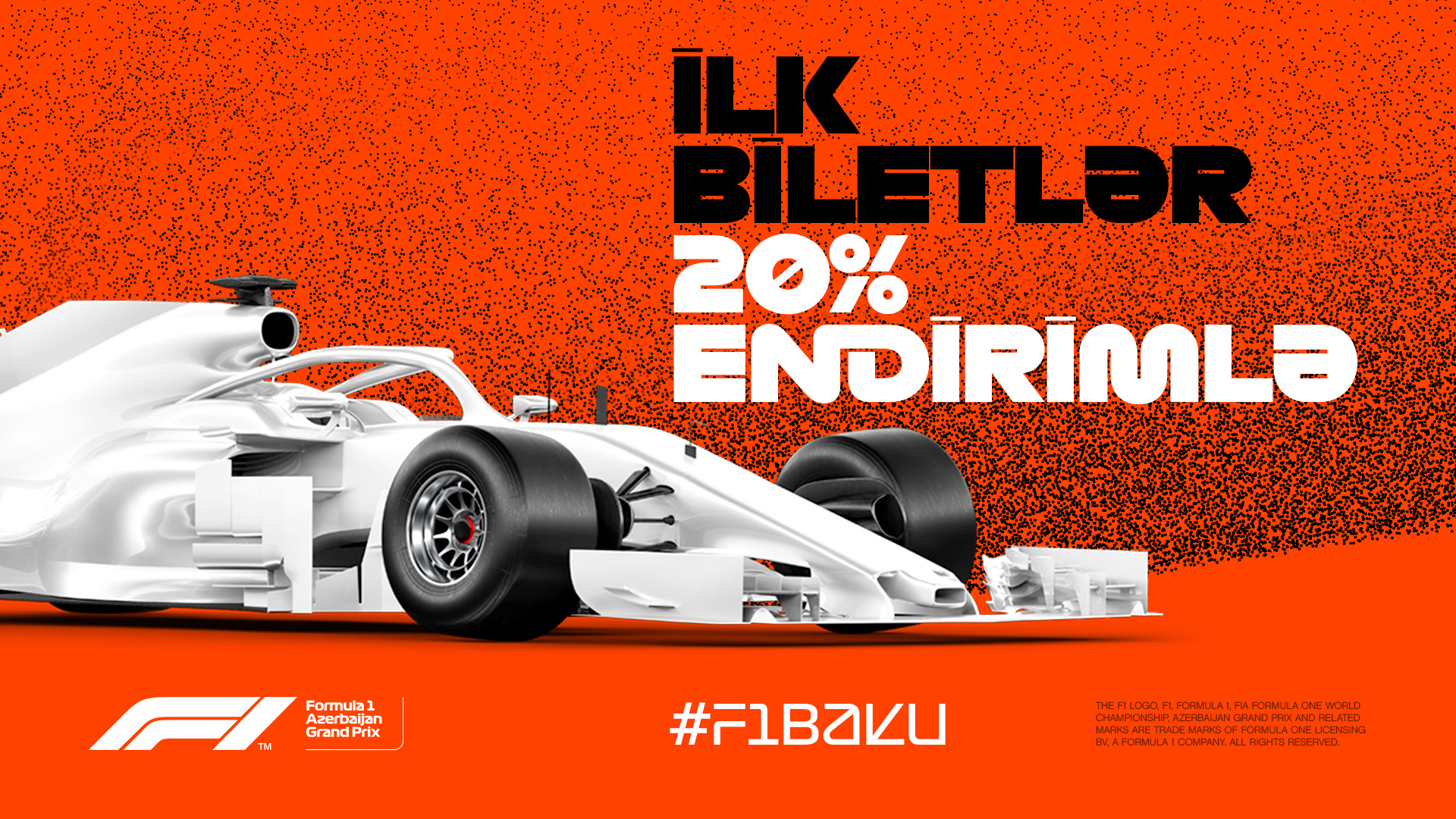 Baku City Circuit (BCC) today announced that tickets for the Formula 1 2019 Azerbaijan Grand Prix will be available at ticket sales points as of today. As for the fans who want to purchase tickets online, BCC will release tickets at www.bakucitycircuit.com  later this week (further details about the exact date of online ticket release will be announced later).

The fourth successive Formula 1 race to be staged on the streets of Azerbaijan’s capital city is taking place on the weekend of April 26th - 28th 2019.

Furthermore, BCC is offering fans a limited supply of special ‘early bird’ discounts of 20% on the cost of all 4-day tickets. This exciting offer will be available until January 1st 2019, after which the cost of tickets will revert back to their original price. BCC is encouraging people to act fast and book their tickets for the Formula 1 2019 Azerbaijan Grand Prix as soon as possible while this offer is still available.

A 4-day ticket includes grandstand access to not only the three days of racing as well as all accompanying entertainment offerings but also to a special Public Pit Lane Walk on Thursday 25th April. This unique experience has proven to be a highlight for fans in the three previous races in Baku as thousands of passionate F1 followers get to enter the sport’s inner sanctum to experience the teams’ engineers and mechanics applying the finishing touches to the cars in their respective garages ahead of what is increasingly being recognised as the most unpredictable F1 race weekend on the calendar.

The 2018 F1 race weekend in Baku had a tough act to follow after the previous year’s dramatic and unexpected outcome. Expectations were high for another exciting and unpredictable race through Baku’s high-speed straights and winding, narrow streets during its new late-April setting. After a now-traditional high octane start, the race appeared to be settling into a familiar pattern with Sebastian Vettel seemingly heading for an uneventful victory. But this is Baku and nothing is ever uneventful here. With 11 laps to go the two Red Bull drivers, Daniel Ricciardo and Max Verstappen took each other out of the race after a long running battle all afternoon when they collided in controversial circumstances heading into Turn 1 before Haas’s Romain Grosjean inexplicably slammed into a wall while the safety car was out. When the dust settled, it was Valtteri Bottas who led the race, with Vettel dropping back to fourth after an ambitious move to retake the lead went awry. However, the streets of Baku had one more surprise left when Bottas was forced to abandon certain victory when his car sustained a puncture caused by debris left on the track. Somehow, Lewis Hamilton ended up taking victory ahead of Ferrari’s Kimi Raikkonen and a jubilant Sergio Perez in his Force India – the Mexican’s second podium in three years in Baku. Another thrilling battle on the streets of Baku that lived up to its pre-race hype to always expect the unexpected.

BCC’s Executive Director, Arif Rahimov, welcomed today’s announcement and urged fans to make sure they don’t lose out on this discount opportunity: “We are delighted to announce the launch of our ticket sales for the fourth Formula 1 race weekend in Baku. We value all the fans who come to Baku every year and we believe that our early bird discount offering will once again act as a strong incentive for people from both home and abroad to book their weekend tickets as early as possible. Last year’s race was once more a spectacular occasion, producing one of the most remarkable finishes to an F1 race in recent memory and further cementing Baku’s reputation as the most unpredictable race weekend of the year. We are once more expecting the unexpected when F1 arrives back in town in 2019! I would advise fans to act fast and get their tickets while they are still available!”

In addition to the discounted 4-day ticket offering, special ‘Junior’ tickets for children aged 2-15 will also be made available to families travelling to the event together. These can only be purchased in conjunction with an adult ticket and only in the 4-day format. Where necessary, Valid ID with proof of age will be required at point of entry.

Daily Roaming Tickets will also be on offer at full price to those preferring to watch the action from different locations on the track on various standing areas and podiums.

For more information on how to purchase tickets and plan your stay in Baku for the  Formula 1 2019 Azerbaijan Grand Prix please visit: www.bakucitycircuit.com