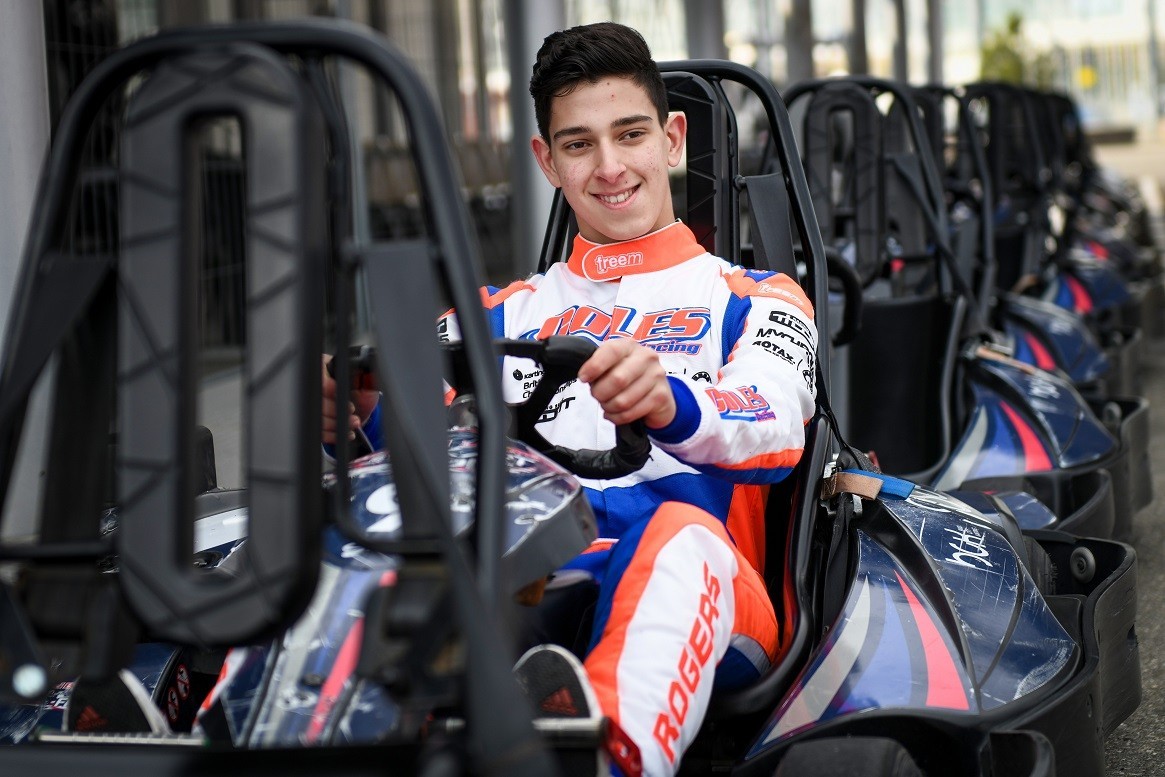 This year has been the most successful of the young driver’s career so far. He has been one of the fastest drivers in the highly competitive environment of the Super One, British Karting & BNL (Belgium) championships, clinching 5 podiums across the series’ 8 races, which earned him 3rd place in the overall standings.

During his meeting with some lucky karting lovers and various media representatives, J. Rogers said that he is aiming at one day racing in Formula 1: “I started karting at the age of 8. I read about it in a magazine and got pulled into it instantly. It has been 6 years that I am doing it now.

I finished in 3rd place this year in the ‘Super One’ championship which is my biggest achievement to date. I am planning to invest another year in karting and then see what I can do in Formula 4 after that. It requires a great deal of resources. Therefore, I am currently intensively searching for sponsorships. My biggest goal is to fight for a podium in Formula 1 some day!

Everyone in my life, especially my parents, is encouraging me to race in karting. Moreover, my competitors motivate me to work harder as well. Every time I race, all I think about is that I have to get a better result than them”.

The teen pilot also said that he has a great interest in DJing alongside his passion for motorsport: “Besides racing, I love music. I like DJing when I come home after races. It helps me to rest and relax.”

The organizers of the visit - including Nigar Arpadarai, the Head of Marketing and Communications at BCC, Jamil Taghiyev, the head of BCKC and Elnara Aliyeva, the public relations manager of the centre  - also talked about their future plans to improve motorsport in the country and the development of homegrown drivers.

Baku City Karting Centre (BCKC)  became operational on April 22nd, 2018 with the assistance of Baku City Circuit Operations Company (BCC) and the support of the Azerbaijan Automobile Federation (AAF). Designed to improve motorsport culture in the country and develop national representatives so they can compete in international racing series, the centre is open to those aged 7 and above. The centre also organizes races among general karting lovers regularly. What is more, it also hosts a professional driver school for minors with the intent of developing homegrown stars of the future.

After meeting with media representatives, J. Rogers raced with the students of the centre’s driver school. The race finished with Rustam Valiyev, a student at BCKC, in first place (57,774 seconds), followed by J. Hasanli (58,015) and Isa Huseynov (58,146). The winner was presented with a gift by J. Rogers who said that he was impressed by the professionalism and competence of his competitors.