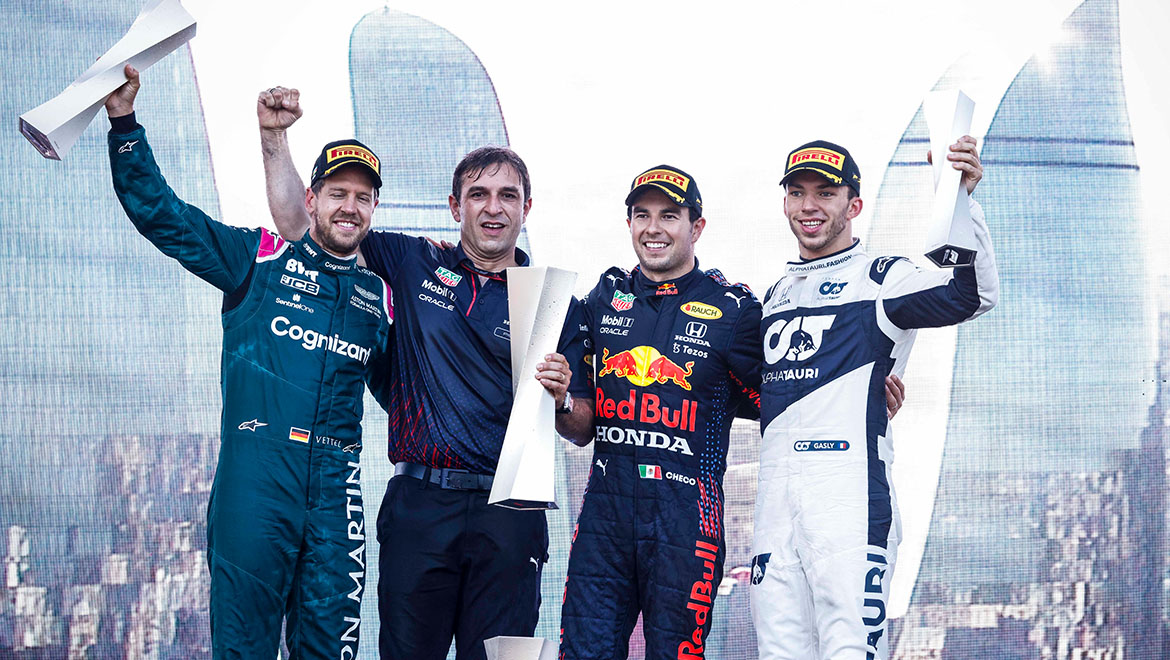 The FORMULA 1 AZERBAIJAN GRAND PRIX  2021 returned today with a race that will live long in the memory, culminating in a hard-earned win for Red Bull Racing’s Sergio Perez – the fifth winner in 5 different races at Baku City Circuit! The popular Mexican driver crossed the finish line ahead of Aston Martin’s Sebastian Vettel & AlphaTauri’s Pierre Gasly, producing a hugely unexpected podium at the race that always delivers the unpredictable.

Pole-sitter Charles Leclerc (Scuderia Ferrari) started well and took an early lead as lights went out at the Home of the Street Fighters for the first time in 2 years. However, he was soon relieved at the front of the pack by Mercedes driver, Lewis Hamilton, who was himself overtaken by his championship rival, Max Verstappen, and his teammate, Sergio Perez, after the Red Bull drivers emerged from their respective pit stops ahead of the 7-time World Champion, who had pitted earlier.

With the Red Bulls combining well to maintain their lead ahead of the Silver Arrow driver, there was further action down the grid as Aston Martin’s 4-time World Champion, Sebastian Vettel, propelled himself from an 11th place start to briefly hold the lead (his first since 2019) before settling into a highly respectable 4th place, behind the leading trio.

In a sign of hat was to come, his teammate Lance Stroll was lucky to emerge unscathed after his tyres blew on Baku’s notoriously fast main straight, causing him to crash into the bollards and out of the race, with the action briefly suspended.

After the restart, the Red Bull pair continued to build their lead ahead of Hamilton before the unthinkable happened when Verstappen’s tyres went on the same straight as Stroll’s, immediately taking the Dutchman out of the race. Thankfully he was unhurt but the pain of this incident - and its impact on the World Championship race - will surely linger with the young superstar for a long time.

After the Red Flag caused by Verstappen’s crash, the action resumed for two breathless laps with Hamilton seeming to grab the lead from Perez at the restart before locking up at Turn 1. Ultimately, the sole remaining Red Bull driver on track saw out the final two laps ahead of Vettel who had cemented second place after Hamilton fell down the order following his error, with Gasly masterfully holding off Charles Leclerc to secure third spot.

What a race to mark the comeback of F1 in Baku after two long years!